In this series of articles I summarize my neuroscience literature review. I tend to omit species specific variation unless I believe that stressing the differences may be illuminating. I focus on the neocortical

The human neocortex is a thin, convoluted sheet of tissue with surface area of ~2600 cm² and thickness of 2-4mm. It contains ~15-20 billion neurons broadly divided into ~6 horizontal layers. There are anatomically distinct vertical minicolumns of ~100 neurons. There are physiologically distinct columns ~0.5mm-1mm in diameter. (1)

Virtually all afferents into the neocortex come from the thalamus with the exception of olfaction. The thalamus is a bilateral collection of nuclei. Rapid sensory or motor information excite modality specialized relay nuclei and their axons project in a topographic manner to primary sensory areas (PSAs). These thalamocortical (TC) projections are called core type. The thalamus also receives neocortical axons into its “higher order” nuclei. It is not clear how this input is transformed before being projected back to neocortex as matrix type input. (2'3)

The most abundant neuron class is the EC pyramidal neuron. Its dendritic tree has two distinct domains: basal and apical dendrites. Several short basal dendrites descent from the base and usually one large apical dendrite connects the soma to a tuft of dendrites. Pyramidal neurons come in different shapes based on their cerebral or laminar position. Usually, proximal dendrites receive excitatory inputs from local sources whereas distal apical tuft from distant cortical and thalamic sources.

Pyramidal neurons are covered in thousands of spines which constitute postsynaptic sites for excitatory synapses. A repeated activation of small spines (~0.25um) increase their size (~1um). Some large spines are perforated, i.e. they contain multiple synapses, which increase synapse strength. The change in number of perforations across the dendritic arbour between apical (more perforations) and distal (less) suggests that the inputs have different properties.

ECs constitute ~80% of all cortical neurons. What follows is a classification on the basis of their axonal projection: (i) intratelencephalic neurons (IT) are the only class projecting into the contralateral cortex; (ii) pyramidal tract neurons (PT) are large neurons of L5B which project to subcerebral destinations (e.g. brainstem, spinal cord and midbrain) and to the ipsilateral cortex, striatum and thalamus; (iii) corticothalamic neurons (CT) project to the ipsilateral thalamus. All classes form recurrent connections with local neurons of the same class. (2)

L4-IT tends to be expanded in PSAs where it receives core type input. Matrix type input and input from other cortical areas is minimal. L4-IT varies in its anatomy across modalities, likely to tune for their respective information patterns. For example, in rodent’s S1 and A1, L4-IT is critically dependent on a few ms precise timings: TC projections excite not only EC but also interneurons which start powerful and rapid feedforward inhibition. The inhibition has a slight delay which creates a window of opportunity for ECs. L4-IT is not much modulated by behaviour or almost not at all in PSAs. In agranular areas such as motor cortex IT-L4 lacks spiny stellate cells (L4ss) and it is not as robust as in PSAs. Here L4-IT receives varied thalamic inputs and corticocortical (CC) inputs from lower sensory areas. Other major cell types found here are star pyramid (L4sp) and pyramidal (L4py). (2'4)

In contrast to the unidirectional outputs of IT-L4, connections among IT of other layers tend to be bidirectional.

L2/3-IT projects densely in L5-IT and PT, but avoid L4. The L2/3-L5 bidirectional pathway is a consistent feature across areas and species. Activations of L2/3 yield oscillatory behavior in L5 but not L4 nor L6-IT. L2 and L3 are often grouped together into L2/3 because there are no anatomical features which would distinguish them. However, evidence for functional differences has accumulated. L2 (extragranular layer) receives much matrix type input (e.g. from the posterior medial nucleus, POm) but no core type. It is also a target of L4. L2 targets L5-IT and PT. L3 (granular layer) receives core type on basal dendrites, matrix type and higher order cortical afferents on apical dendrites. Similarly to L2, it receives inputs from local L4 and L5-IT (although less than L2). L3 outputs to superficial layers and PT. The rapid excitatory input stimulates L2/3 to fire sparsely in time (and quantity?). L2 fires even less than L3. Major cell types are L2py and L3py. (2'4) 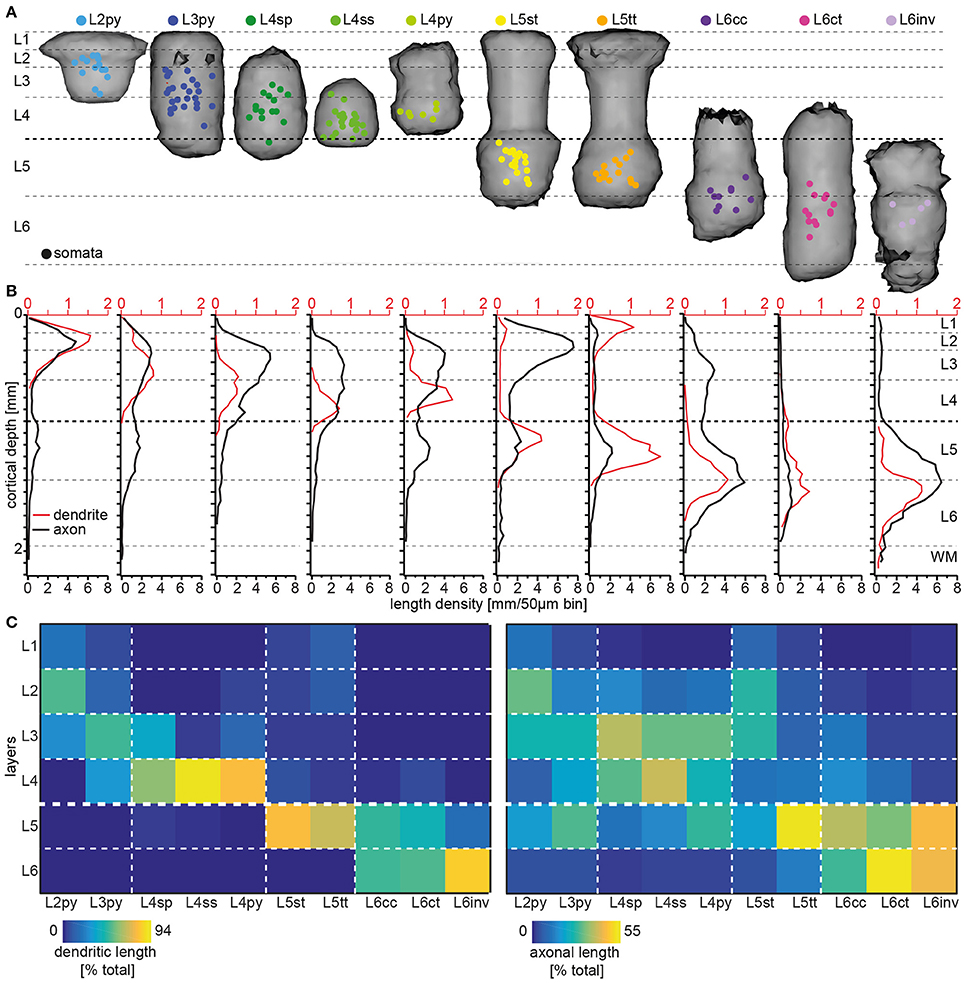 L5-IT is smaller than PT. It contains slender pyramidal (L5st) neurons with thin-tufted apical dendrites stretching to L1. L5-IT is less active than PT, but still more than sparse firing of L2/3-IT. (2'4)

L6-IT makes long range horizontal connections. L6B (L7/subgriseal) neurons are remains (most die out) of the subplate. They have long range excitatory and inhibitory connections. L6 has no axons beyond diencephalon. Major cell type is corticocortical (L6cc). (2' 3 p. 68)

PT neurons form L5B. These neurons integrate CC and TC inputs and broadcast to subcerebral structures as well as the cortex and thalamus. They have little local output. The core type inputs are strong enough to drive them even without L2/3 activations. The axonal destinations vary from cell to cell even in the same area. PT neurons have depolarized resting membrane potentials, non-adapting spike trains and narrow spikes. They have the highest firing rates (dense coding) of all EC classes. Typical cell type is the thick-tufted pyramidal (L5tt). (2'4)

CT in sensory areas projects back to thalamic relay nuclei which are the source of the core type input. A subclass of CT neurons also project to higher order nuclei. CT action potential have notably lower velocities (mean = 1.51 m/s, range = 0.36-6.86 m/s) than IT and PT, and a relatively large spiking delay of up to 30ms after afferent thalamic stimulation. The CT synapses on the thalamic relay cells are small, distal and weak, with a major metabotropic component. CT is remarkably silent even during behaviour. Major cell type is the corticothalamic (L6ct). (2'4) 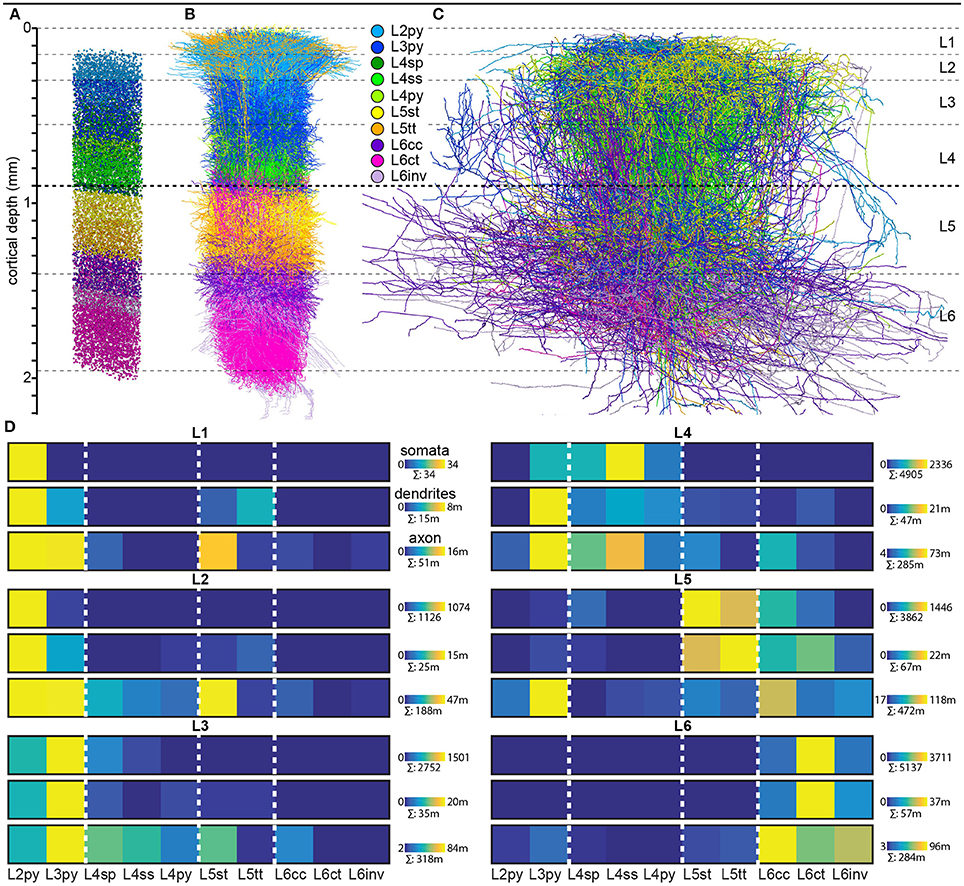 Single-bouquet cells are abundant in L2/3 and are characterized by narrowly focused descending axons. This is a trait shared with inhibitory neurons of L1. Both classes receive strong excitatory input from CC axons in L1, as well as local ECs. Their primary targets are other interneurons such as Sst and Pvalb. Pvalb receive strong core type input inputs. Double-bouquet cells are abundant in L2/3. (2)