In his book A Deepness in the Sky, Vernor Vinge describes nano technology called “the localizers”. This point-sized object floats in zero-gee and communicates with other localizers in its proximity. A localizer is equipped with some processing power and sensors.

Localizers in zero-gee are handy abstraction for thinking about distributed systems. They can model systems across scales (a point can be a dust smite or a planet) and one can plug in any sensors and constrains they need.

A hello world setup is a confined 3-space $S$ of $V_s = 1$ in which localizers are represented by a single point. A localizer can detect the number of peers in its proximity at distance $r = 0.000001$. A million localizers uniformly distributed in $S$ give us ~6 detectable peers. Localizers are pushed away by solid objects we send through the space.

For example, a ball moves across $S$ and we simulate the displacement of localizers in its way. We control 3 localizers $C = \set{c_0, c_1, c_2}$, called controllers, at one of the faces of $S$. How do we leverage the network to track the movement of the ball?

A localizer broadcasts a message ANOMALY to its peer if the number of its peers rapidly changes. ANOMALY message contains two parameters:

When a localizer receives ANOMALY message, it relays it with the same ORIGIN parameter and the HOPS parameter incremented by 1.

Clearly the above algorithm leads to infinite cycles. To patch this defect we store a set of recently relayed ORIGINs. A localizer ignores messages with ORIGIN in this set. A message which started in a single localizer now expands like a shock wave through the network, eventually hitting $C$. Since we know the size of $S$, HOPS parameter estimates distance1. We need to receive a message from the same ORIGIN on all 3 controllers to have some certainty about the origin of the message2.

Instead of displacement, localizers can broadcast sensory data. An operator of such network might want to make queries to the network rather than passively await an anomaly. For example, let’s assume that the localizers are equipped with thermometers and the operator wants to measure the temperature around some point $P$. We need to solve two problems:

Let’s start with a simple case where we know the localizer density of $S$, localizers are uniformly distributed and we broadcast messages from one receiver in all directions (shock wave shape) with ~ equal speed.

We can interpret HOPS_TO_GO as a distance from a controller to the localizers in the area we want to query. But since the message propagates like a shock wave, the HOPS_TO_GO “distance” is a radius around the controllers. We therefore combine messages from several controllers and target the intersection of their shock waves with the UNION parameter.

Let’s introduce a static obstacle $O$ of $V_O = 0.25$ in the center of $S$. We have perfect knowledge of the environment, however we cannot rely on the translation between hops and distance beyond $O$.

We introduce a forth parameter TAIL to the QUERY message. TAIL parameter contains another QUERY message. The recursive nature of TAIL works like a schedule. Following figures depict how this concept works in a 2-space with 2 initial controllers $S_1$ and $S_2$. 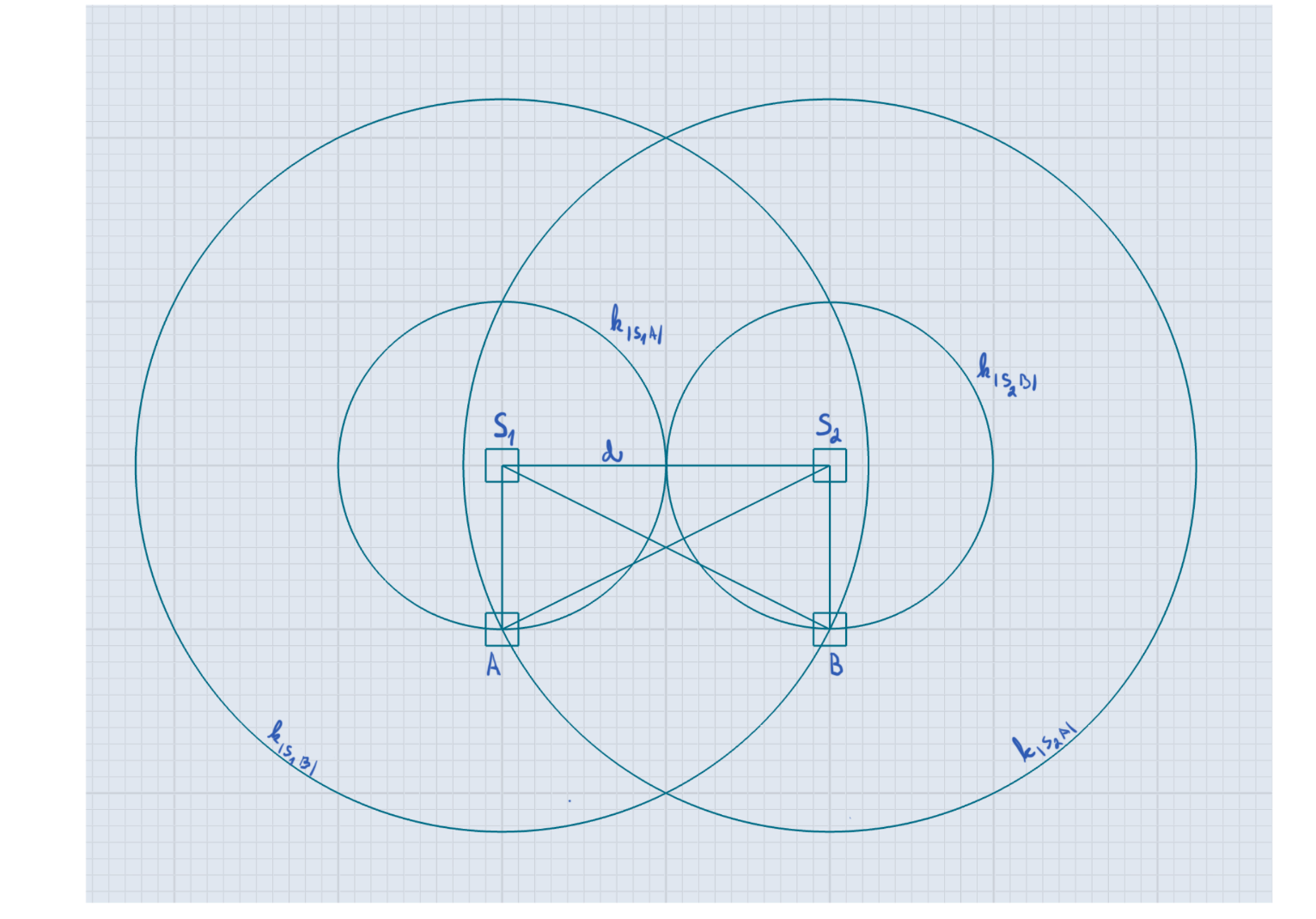 We send 2 QUERY messages from each controller. $S_1$ sets HOPS_TO_GO to translation of the distance $|S_1 A|$. Analogically distances $|S_1 B|, |S_2 A|, |S_2 B|$ correspond to one message each. UNION is set to 2 for all messages, because we expect intersection of 2 circles in both A and B. 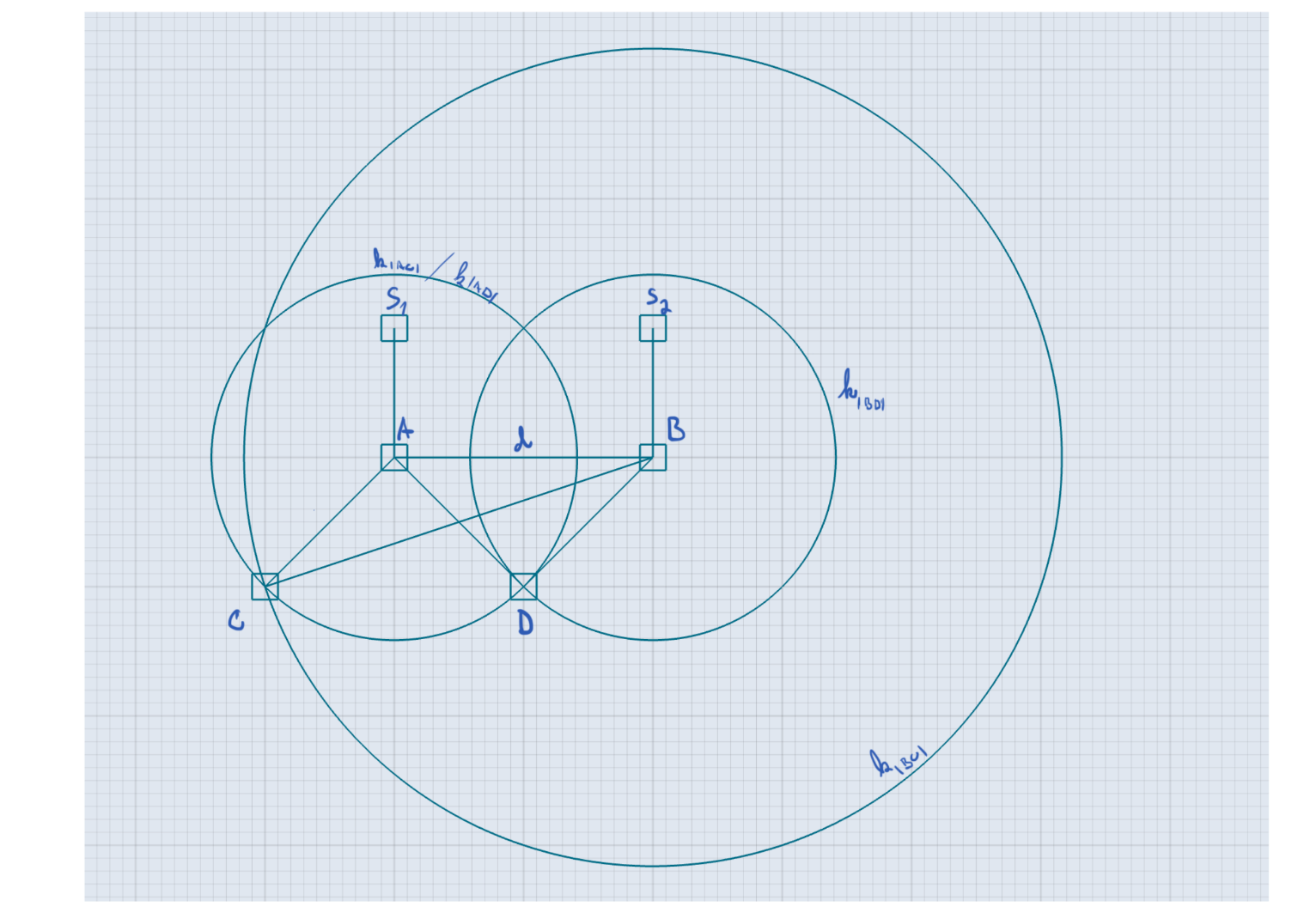 The TAIL parameter allows us to recursively unfold the QUERY. After localizers in A and B receive the messages, they read the TAIL parameter containing instructions for another QUERY message which leads to points C and D. In the example we set HOPS_TO_GO to target points C and D under an angle. Using this technique our QUERY message can navigate known space even though a single localizer posses no information about its own position3. Extending this technique to 3-space $S$ we can navigate around $O$, thereby reading sensory information of localizers positioned behind $O$4.

We solve a situation in which we don’t know the number of localizers upfront. A localizer periodically broadcasts PING message to its peers. The message contains ORIGIN id and HOPS counter. We promote the set of recently relayed ORIGIN ids to a map between an ORIGIN and a timestamp (let’s assume our localizers posses some sort of clock). A localizer can estimate current load of the network around it. Let’s denote this as NETWORK_LOAD variable.

A localizer remembers the last time it sent a PING message. Let’s denote this as SINCE_LAST_PING variable. A decision function for broadcasting PING accepts SINCE_LAST_PING and NETWORK_LOAD and yields a boolean. Each localizer performs this computation in some interval.

By listening to the network, we can track a path taken by some subset of localizers through the space, which is useful if we know that those localizers are attached to an object of interest.

A major issue with periodic PING is deploying it on scale. Say we have a space of size of a cargo container uniformly filled with localizers which are ~0.5mm apart. To fill the volume of $50m^3$ we would need 100k localizers. Say the frequency of a PING event should ideally be 10s. That results in 10k new messages broadcasted to neighbours every second. The LOAD variable should throttle messages in a busy network, right? Yes, the network will auto adjust the periodicity of the PING message, but the periodicity only depends on the density and what a localizer considers high LOAD There’s no guarantee the throttling will result in a reasonable periodicity.

To lower the periodicity of PING messages from the same localizer, we can further limit hops by a constant MAX_HOPS. Therefore we can at least estimate density in the proximity of MAX_HOPS from the controllers. Further investigation on the behavior of periodic messages in the network is necessary.